Instant Pot Scalloped Potatoes -With An Option to Add Ham

I would have never imagined that I would be making scalloped potatoes in the Instant Pot. I have always made them in the oven and they were perfect.

However, one day when I was making a large meal for our extended family, I ran out of oven space.

I had a large ham taking up the space on the top rack, and a large baking sheet of roasted vegetables on the bottom rack.

So I pulled out my trusty Instant Pot and our Instant Pot Scalloped Potatoes recipe was born!

I have never followed a true recipe when making Scalloped Potatoes. I have just used the basic concept of milk, cheese, spices and potatoes.

However, there have been a few good surprise ingredients that make this recipe so tasty!

I use both heavy cream and milk. The cream adds not only a little thickness to the sauce, but also another depth of flavor that you wouldn’t get if you only used milk.

When adding garlic I prefer to grate mine with a microplaner, as it blends better with the sauce mixture.

Don’t be afraid of using cayenne pepper. It adds a little flavor without a hint of heat.

I actually came across using cilantro in my recipe by accident. When I would make scalloped potatoes in the past, I always grabbed a small handful of parsley and threw it in.

When I went to the grocery to gather the ingredients, I mistakenly bought cilantro instead. So I decided that I would give it a try!

It was amazing! Now I use it in my recipes all the time!

And one last hint – if you prefer, you can peel your potatoes. If i have enough time I do, but sometimes I am in such a hurry, that I keep the peels on. Either way, they taste great!

To receive our 3 Recipe Articles in your inbox each week, sign up for our free email list. 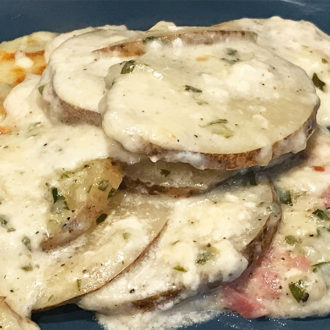