Bananas Foster is a spectacular dessert that only requires a few ingredients to make.

It is hugely popular in New Orleans. This is not only because it is delicious, but it is also where it was invented.

In the 1950’s New Orleans was the major port of entry for bananas that were being imported from Central and South America.

And the result, the birth of Bananas Foster. The owner loved the dessert so much that he named it after his good friend, Richard Foster, who was a local business leader.

What is Bananas Foster?

Bananas Foster starts with peeled bananas that have been sliced in half horizontally.

They are then sauteed in a cinnamon-sugar, butter mixture and then drenched in banana liqueur and dark rum.

Minutes later, they are set on fire so the liquor can quickly burn off. This leaves you with soft bananas in a smoky rum flavored sauce.

Served with a scoop of vanilla ice cream and you have a delicious, yet classic, Bananas Foster dessert.

Is The Fire Necessary?

Traditionally, this dessert is prepared table side by a chef. A cooking cart is brought to the table so that the guests can witness the impressive burst of flame when the rum is lit on fire.

However, this process can be intimidating to the novice Bananas Foster chef.

Because you don’t want the bananas to become too soft during the cooking process, it is crucial that the rum be flash burned to remove the alcohol from the dessert.

But there are a few tips that you will want to follow for maximum safety when completing this at home.

First and foremost, be sure to have a large lid that will fit over the skillet readily available during the cooking process.

If you feel like the flame is out of control, simply place the lid on the skillet and the flame will be snuffed out.

Secondly, wait until the rum is warmed up before lighting it on fire with a long lighter. This will allow time for alcohol to heat up and burn off quickly.

And finally, be sure to tilt the skillet away from you and at an angle. This allows the alcohol to gather in one area rather than over the entire surface of the skillet.

And if you are totally terrified to try to this technique there is another option. Place the rum in a separate sauce pan and bring to boil.

Boiling for 30 seconds will allow the alcohol to evaporate. After that, it can be added to the bananas to provide the rum flavor to the dessert.

Check out our other New Orleans Inspired Recipes 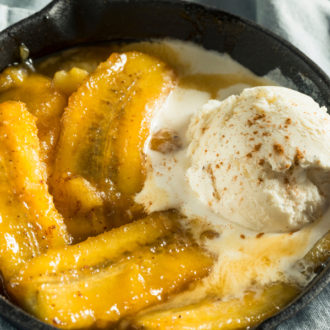 A warm dessert consisting of bananas cooked in a brown sugar and cinnamon sauce and then flavored in banana liqueur and rum and served over a scoop of vanilla ice cream.
Print Recipe Pin Recipe
Course Desserts
Servings 4 people

Be sure to heat the rum prior to lighting it on fire as cold alcohol will not flame up. You can omit the flaming process if you prefer. Recipe provided by Make Your Meals
Tried this recipe?Let us know how it was!
Bananas Foster Recipe – A Favorite New Orleans Dessert
Tagged on: bananas    Desserts    New Orleans    rum