When you search what are the best things to eat while you are in Louisville, KY it might surprise you that a dish called The Hot Brown will be at the top of the list.

When I first stayed in Louisville, I was expecting everyone to guide me to all the wonderful barbecue restaurants in town. Or maybe to a local distillery for a taste testing.

However, when I began to ask what was the one ‘Must Try’ food while I was in town, the Kentucky Hot Brown kept coming up in the conversation.

Now don’t get me wrong, there are some absolutely wonderful local barbecue places in town. And there are some delicious Bourbon slushies and Mint Juleps to be had.

However, the history behind The Hot Brown dish had me intrigued.

The History of The Hot Brown

The Brown Hotel in Louisville made this dish famous in the 1920s.  After a typical roaring 20’s dance party, hotel patrons would drift over to the hotel restaurant in the early hours of the morning in search for something to eat.

A large chunk of turkey breast was served on top of thick Texas toast that was topped with tomatoes, Mornay sauce and bacon. It was the perfect combination of flavors that still remains popular today.

Although there have been many variations of this recipe, this is the original recipe that comes straight from The Brown Hotel itself. It’s so famous that there is even a book dedicated to the original hot brown open-faced sandwich and all the recipes that have stemmed since. See: The Hot Brown: Louisville’s Legendary Open-Faced Sandwich.

It is so popular that it has been featured on various television shows such as NBC’s the Today Show, Man Vs. Food and has even had Bobby Flay trying to replicate the dish.

So if you ever pass through Louisville, you will have to make a visit to The Brown Hotel and try out this legendary dish. But until then, give it a go yourself by following this recipe! 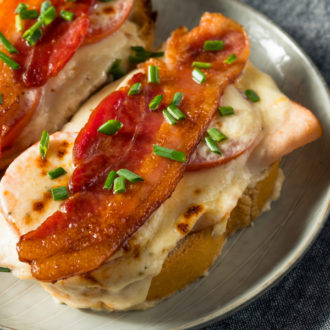 To assemble the Hot Brown

Recipe provided by Make Your Meals
Tried this recipe?Let us know how it was!
Kentucky Hot Brown Recipe -Louisville’s Most Famous Dish
Tagged on: Bacon    Bread    Famous Dishes    Tomatoes    Turkey